“If I had a choice, I would never go to the hospital.” She speaks unequivocally. “We are treated like animals there. The doctors do not attend to us themselves and the nurses say things like, ‘ How do they live! Where do these stinky people come from? ’” says Sudama Adivasi of Aneai village in Varanasi district, recalling how, when and why she delivered her first five children at home.

Sudama has had nine children in the last 19 years. At 49, she is yet to reach menopause.

She lives in the Musahar basti of 57 families at one end of the village in Baragaon block, flanked by houses of the dominant caste Thakurs, Brahmins, Guptas. There are also a few Muslims homes and some other Scheduled Caste households – of Chamar, Dharkar and Pasi families. The basti appears to confirm various stereotypes associated with the community – half-clothed, dusty children, flies buzzing about their thin, food-smeared faces, and an utter lack of sanitation. But a closer look tells a different story.

Listed among the Scheduled Castes in Uttar Pradesh, the Musahars were originally skilled at catching rats that would otherwise plague agriculture. Over the years, their occupation became a source of stigma, and they came to be known as ‘rat eaters’ – that’s what the word ‘Musahar’ means. The community faces ostracism and humiliation by other social groups, as well as complete neglect by governments, and lives in utter deprivation. In neighbouring Bihar, they are classified as ‘ Mahadalit ’ – the poorest and most discriminated-against sections among the Scheduled Castes.

Sudama Adivasi and her children, on a cot outside their hut in Aneai village. ‘We have seen times when our community was not supposed to have such cots in our huts. They were meant for the upper castes only,’ says Sudama.

At the centre of their malnourished basti in Aneai village – perhaps ghetto would be a more appropriate word – outside a thatched mud hut sits Sudama on a charpoy. “We have seen times when our community was not supposed to have such cots in our huts,” she says, pointing to the one she is sitting on. “They were meant for the upper castes only. If the Thakurs were to see us on a cot like this while they walked around the village, they would say what not!” By which she means vicious abuse.

She adds that even though people may appear to believe less in caste these days, its hold on their lives continues. “Now, every household [here] has cots, and people even sit on them.” Women though are still denied this seeming privilege: “Women still cannot – not while our elders [in-laws] are around. My mother-in-law once yelled at me in front of our neighbours because I was sitting on the cot.”

Three of Sudama’s children are running around the cot while she sits holding the fourth one in her arms. She’s slightly confused when I ask her about the number of children she has had. At first, she says seven, then corrects herself as she remembers Anchal, her daughter, married and now with her in-laws. And then yet again as she thinks of another, who died last year. Finally, she starts counting on her fingertips the seven still with her: “Ram Balak, who is 19; Sadhna, 17; Bikas, 13; Shiv Balak, 9; Arpita, 3; Aditya, 4; and Anuj, who is a year-and-a-half old.”

“ Arre jao, aur jaake chachi logo ko bula lao [Hey, go get the aunties here].” With a wave of her hand, she directs her daughter to invite some of the women in the neighbourhood to join us. “I would have been 20 when I got married,” Sudama continues, “but till the time I had three or four children, I had no idea about condoms or operations [sterilisation procedures]. Finally, when I came to know about them, I could never muster the courage to get it done. I was afraid of the pain involved in the operation.”  To get the procedure done she would have had to go to a primary health centre (PHC) in Baragaon block headquarters, some 10 kilometres away. The local PHC is not equipped to perform such operations. 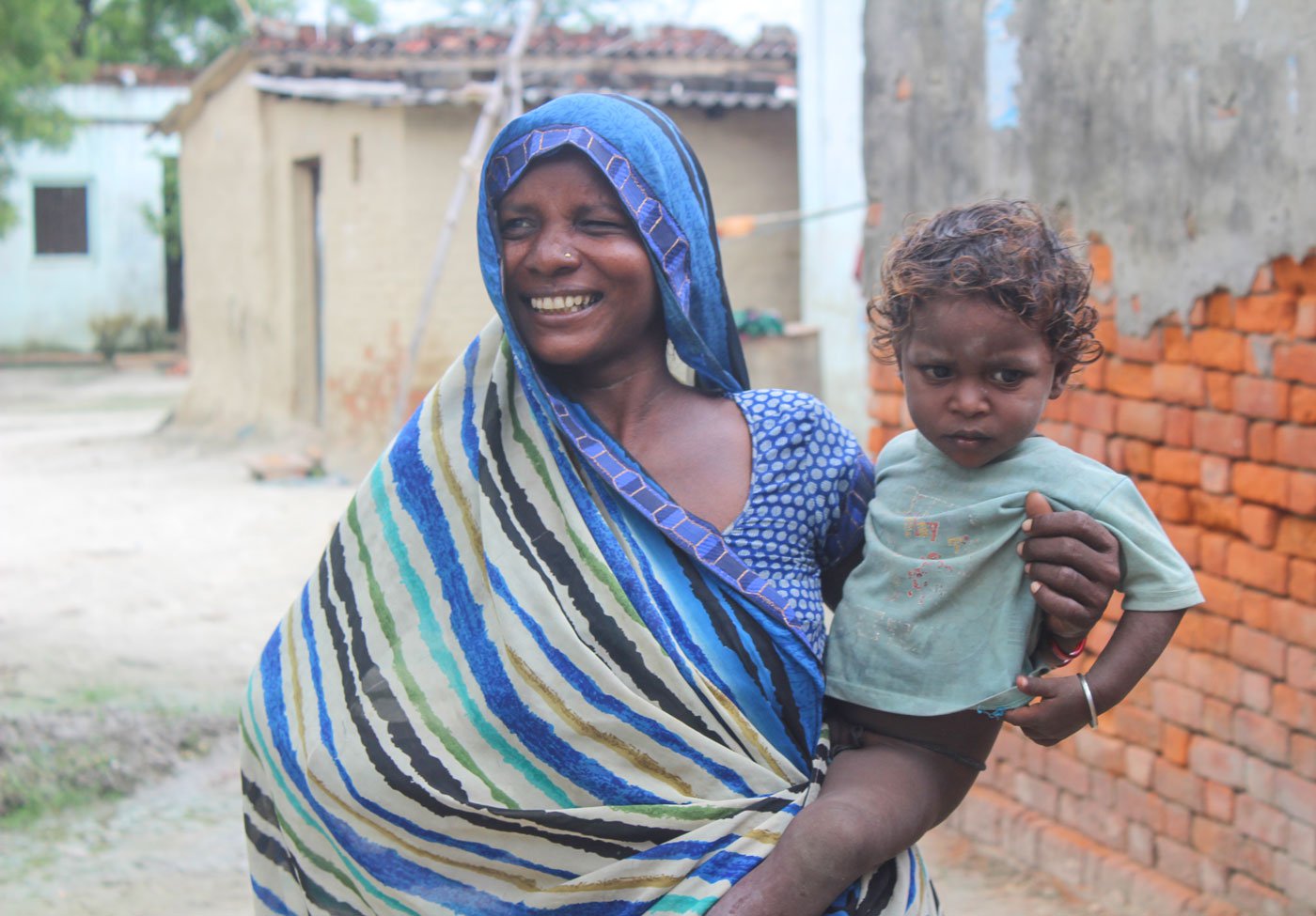 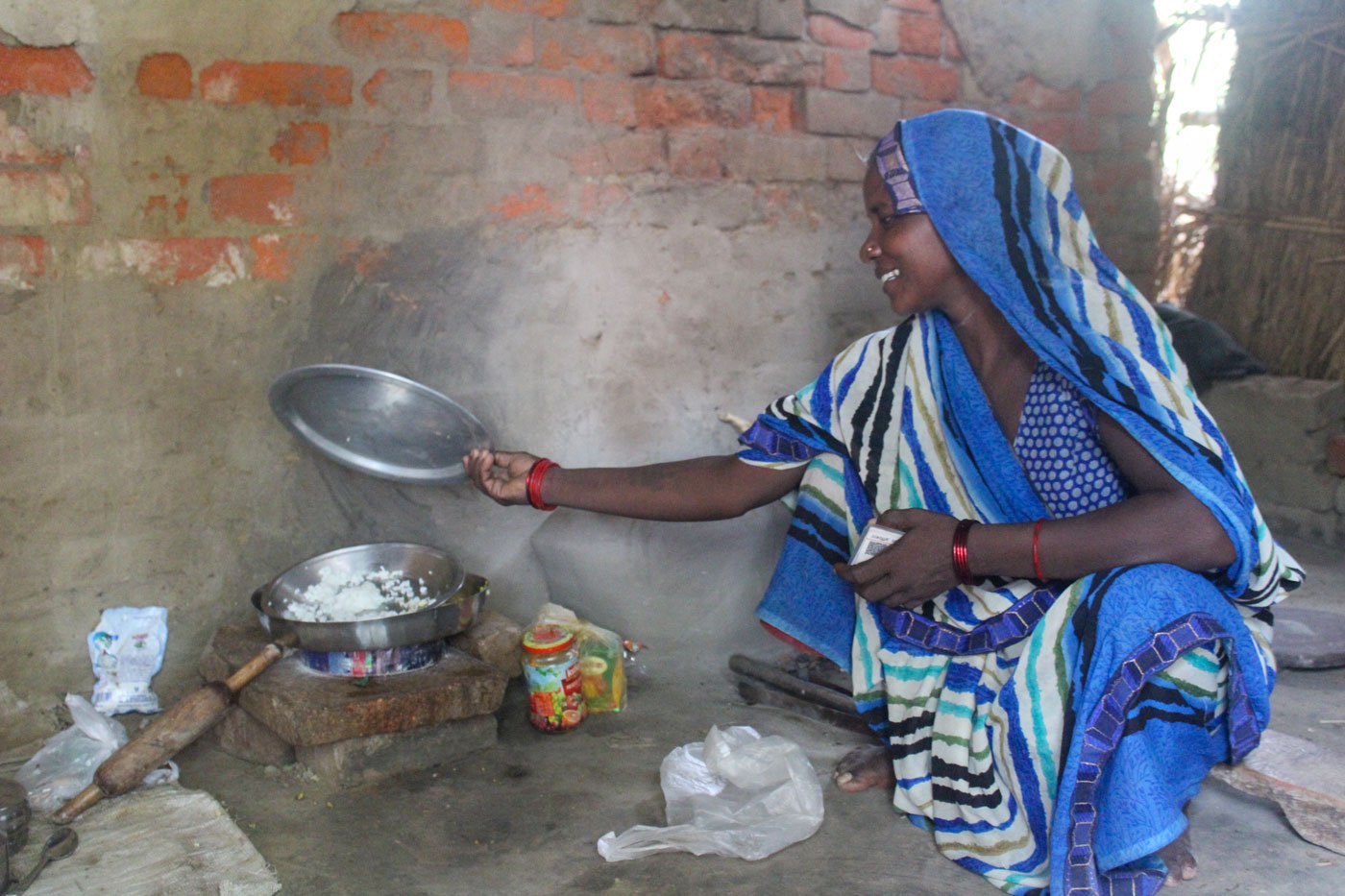 Left: Sudama with her youngest child, Anuj. Right: She cooks on a mud chulha in her hut. Most of the family’s meals comprise of rice with some salt or oil

Sudama is a homemaker, and her husband, 57-year-old Rambahadur, “is in the rice field. This is the sowing season,” she says. After the harvest, he, like many others, migrates to nearby cities to work as a construction labourer.

The majority of men in the Musahar community here work as landless labourers, while a few families cultivate on the basis of adhiya, teesariya or chauthiya (sharecropping arrangements working on someone else’s field and receiving half, one-third, or a fourth of the crop). Sudama’s husband works on a teesariya, or one-third basis, and sells a part of the crop he brings home to buy essentials for the family.

Today, Sudama has cooked rice for lunch. A mud chulha inside the hut bears the weight of the rice vessel. Most of the family’s meals comprise of rice with just some salt or oil. On very good days, it’s eaten with lentils, vegetables, or chicken. Roti may make a weekly appearance.

“We will eat rice with the mango pickle,” says her daughter Sadhna as she serves the meal to her siblings on steel plates. The youngest one, Anuj, eats from Sadhna’s plate while Ram Balak and Bikas share a plate. 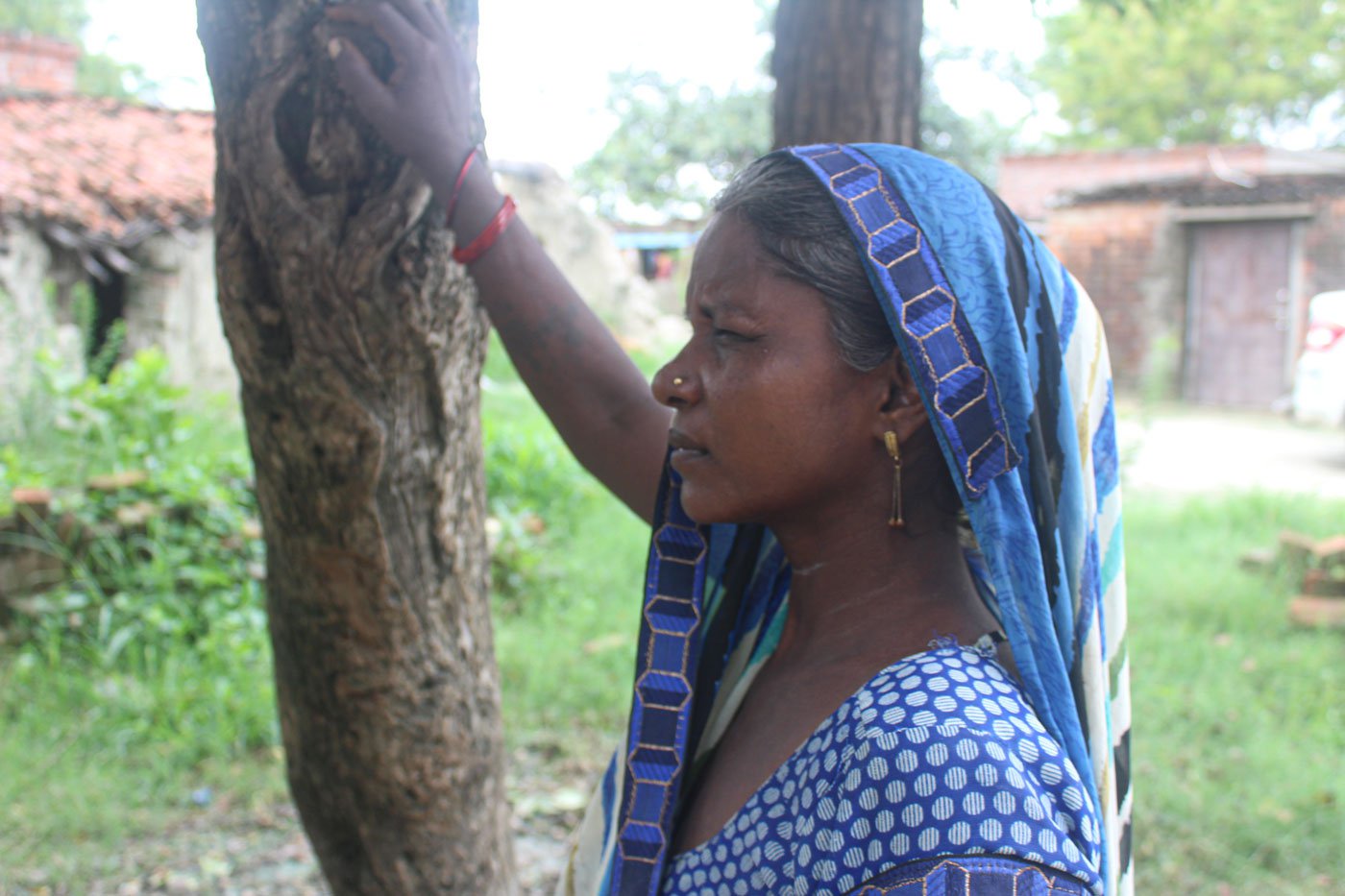 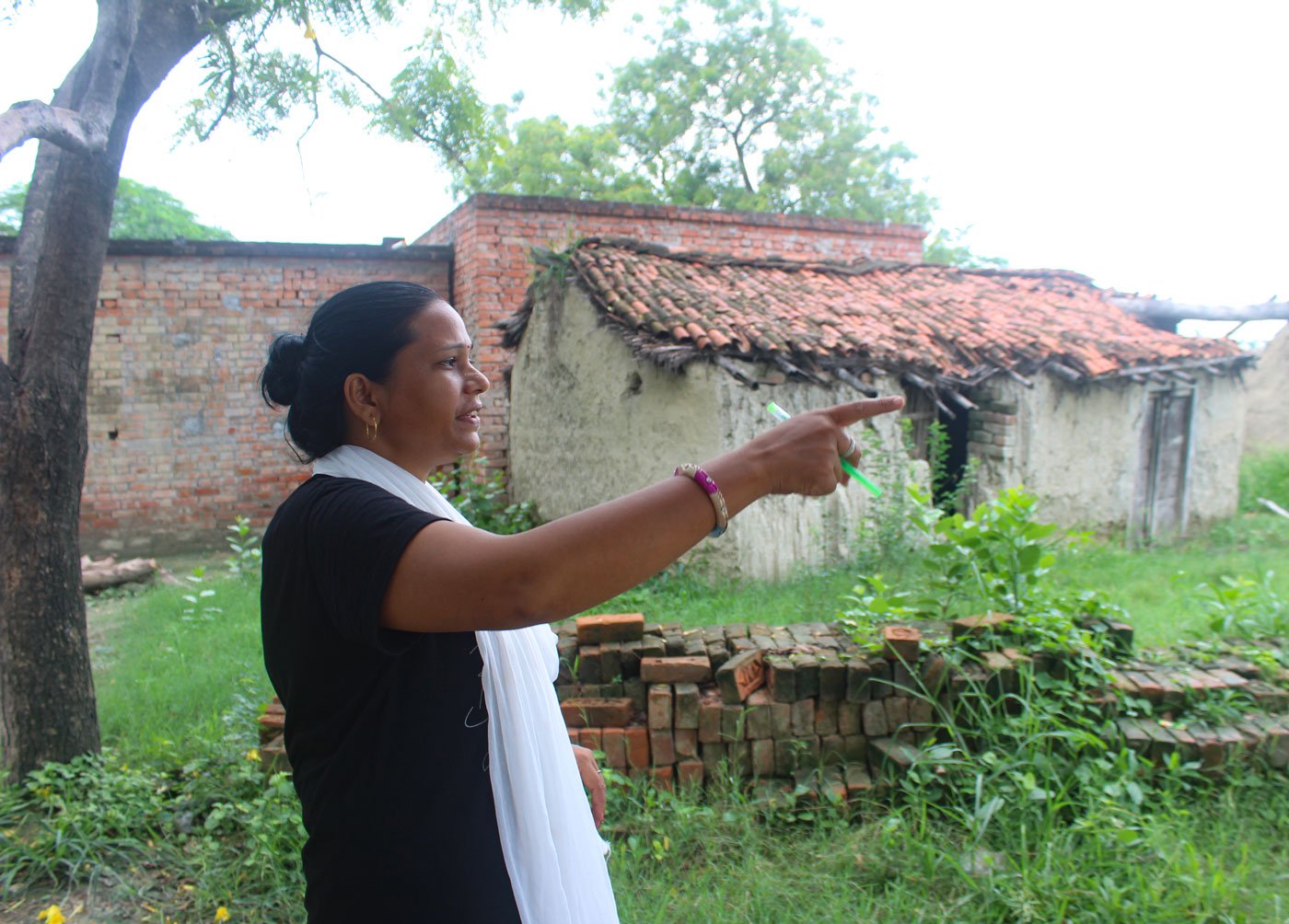 Left: The caste system continues to have a hold on their lives, says Sudama. Right: Sandhya, a human rights activist who works in Aneai’s Musahar basti, says that every woman there is anaemic

A few women from the neighbourhood have joined us by now, among them 32-year-old Sandhya, who has been working in this basti for over five years as a member of the Manvadhikar Jan Nigrani Samiti, a human rights group. Sandhya begins by talking about the widespread problem of anaemia. Though the 2015-16 National Family Health Survey-4 (NFHS-4 ) notes that 52 per cent of women in Uttar Pradesh may be anaemic, in Aneai, she says, 100 per cent of them suffer from moderate or acute anaemia.

“We recently did poshan- mapping [a nutrition assessment] of all the women in this village,” Sandhya adds, “and found that not even one of them has haemoglobin above 10 gm/dL. Every single one of them is anaemic. Besides this, leukorrhea and calcium deficiency are other common problems among women.”

These health issues and deficiencies are accompanied by a prevailing distrust in the public healthcare system, where they are called names and receive very poor attention. So unless it is an emergency, the women won’t go to the hospital. “My first five deliveries happened at home itself. Then the ASHA [Accredited Social Health Activist] started taking me to the hospital,” Sudama says, about her fear of clinics.

“Doctors do discriminate when it comes to us. But that is not new, the real challenge begins at home itself,” says 47-year-old Durgamati Adivasi, a neighbour. “We are looked down upon by the sarkar , doctors, and our men alike. They [the men] only know how to indulge in the pleasures of the flesh, not the aftermath. The only responsibility they think that they have is of feeding the family. Rest all is meant for us women,” adds Durgamati, a note of agitation creeping into her voice.

The health issues are accompanied by a prevailing mistrust in the public healthcare system, where they are called names and receive very poor attention. So unless it is an emergency, the women won’t go to the hospital.

“Har biradari mein mahila hi operation karati hai [In each community it is the women who undergo the tubectomy]” says 45-year-old Manorama Singh, the ASHA who is in Aneai to distribute iron supplements. “Go around the village – you will not find a single man who has had a vasectomy. God knows why it is only the woman’s job to give birth and to get operated too,” she adds. The 2019-21 NFHS-5 shows that the only 0.1 per cent of men in Varanasi have been sterilised – while the number for women is 23.9 per cent.

Even NFHS-4 had confirmed: “Almost two-fifths (38 per cent) of men of age 15-49 in Uttar Pradesh agree that contraception is women’s business, and a man should not have to worry about it.”

Sandhya makes a similar observation based on her work in the village. “We have been actively telling them [the men] about the importance of family planning, and distributing condoms as well. In most cases, the male partners do not agree to use condoms even when their wives ask them to. Also, pregnancies stop only if the family and the husband want it to.”

The contraceptive prevalence rate, or CPR, among married women in the 15-49 age group in Uttar Pradesh was 46 per cent in NFHS-4 – slightly up from NFHS-3, where it was 44 per cent. Women in Uttar Pradesh are more likely to use contraception, the survey says if they already have a son. “None of them seems to care about family planning, especially the men,” adds Tara Devi, also an ASHA worker, who accompanies Manorama and works in another nearby hamlet. “The average number of children in the families here is six. Most of the time it stops due to age. And the men, they say they cannot bear the pain and complications of a nasbandi [vasectomy] if you ask them.”

“He has to earn for and take care of the family,” Sudama says, “How can I ever think of him getting operated? That is not even an option.”

The lead illustration by Jigyasa Mishra is inspired by the Patachitra painting tradition. 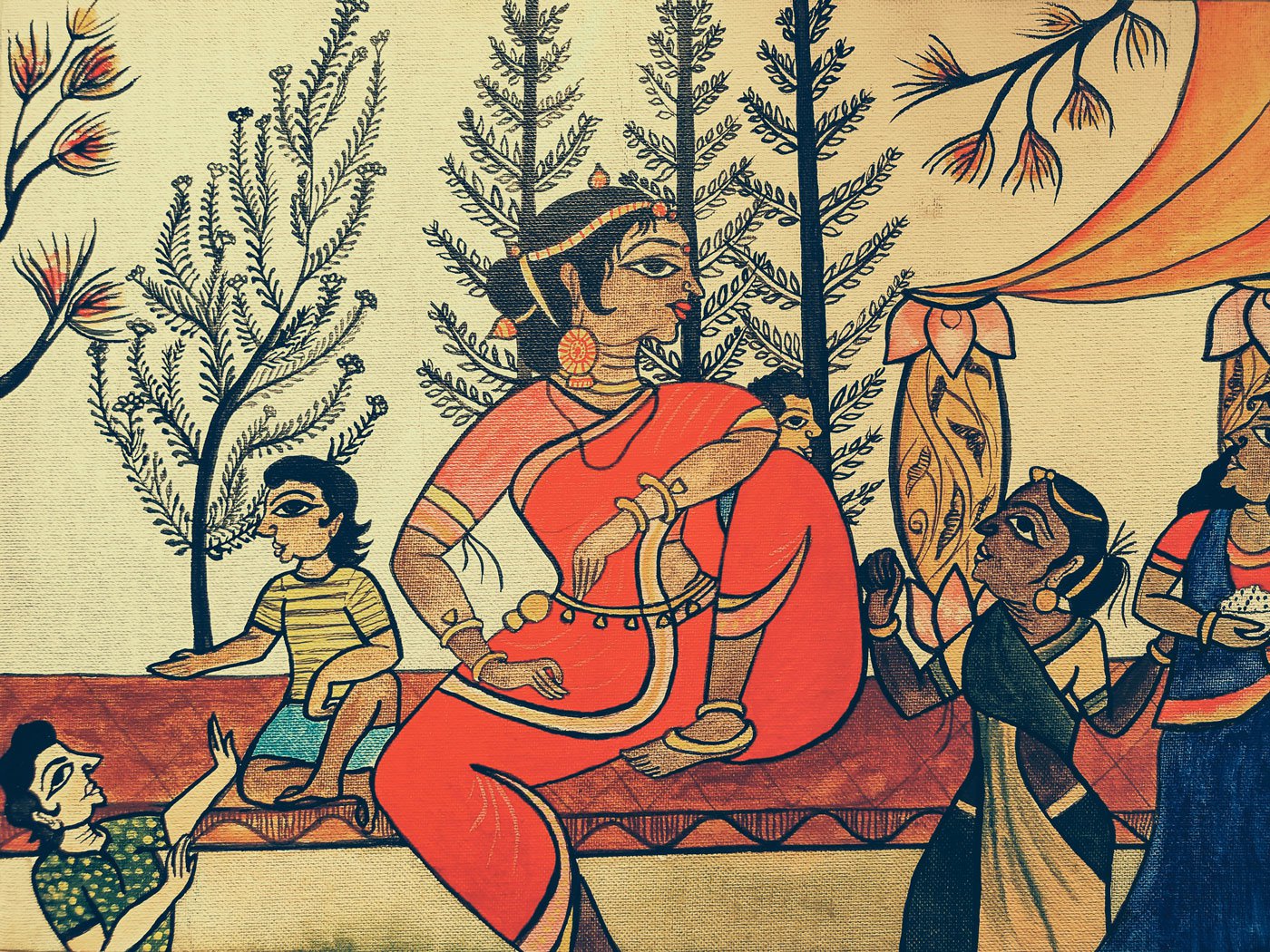 In UP: male nasbandi –‘not even an option’ 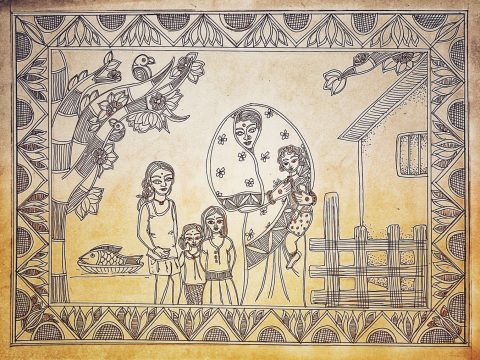 In Madhubani, girls are born but not certified 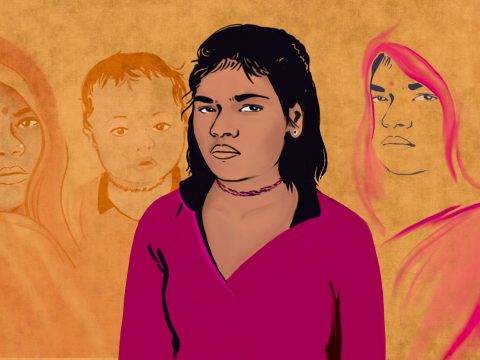 In UP: ‘Our village lives in another era’ 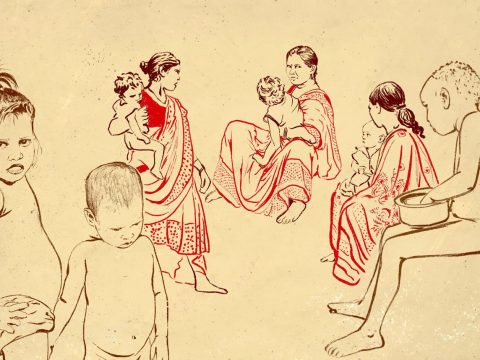 Three daughters? Then have two sons at least